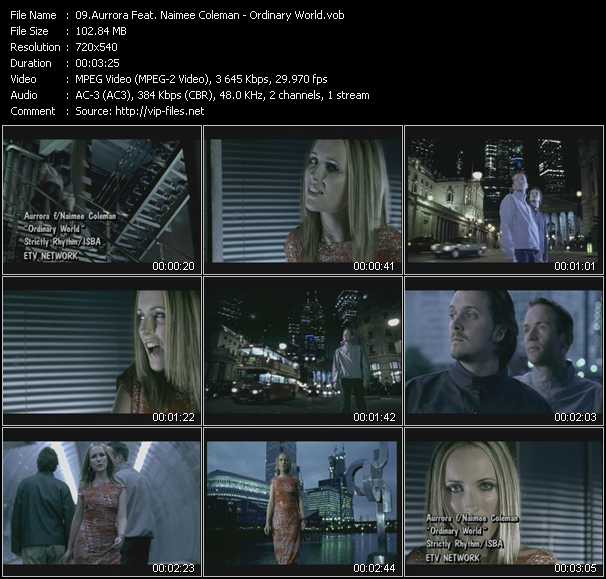 A native of Dublin, Ireland, Naimee Coleman has been singing, songwriting and performing since she was sixteen. After signing with EMI, she recorded her first solo album "Silver Wrists" in Abbey Road Studios. The follow up "Bring down the Moon" came 4 years later. On the strength these records she toured throughout Europe, the US and as far a field as Japan, where her singles topped many airplay charts. While touring, Naimee has shared the stage with and opened up for artists such as Van Morrison, Susanne Vega, Jackson Browne, 10,000 Maniacs, Sinead O'Connor and Sting. She has written with Howard Jones, Phill Thornally (The Cure), Pam Rose, Maiah Sharpe and Aurora. In 2000 Naimee appeared on Aurora's UK top 5 hit 'Ordinary World' as a guest vocalist. The last few years have led Naimee to Los Angeles where she has just finished recording her third album "Survive".

Two producers hailing from the UK. Aurora made their debut in 1999 with 'Hear You Calling' but only really hit the big time when second single 'Ordinary World' peaked at number 5 in the UK chart. Building on that success, they went on to record their eponymous debut album, straying away from the trance and dance genres they'd used for the singles, and using chilled, downtempo versions of their songs. Aurora have worked with a whole host of different vocalists, such as Naimee Coleman, Lizzy Pattinson, James Khari and Marcella Detroit.

Ordinary World (Above And Beyond Remix) - Aurora Feat. Naimee Coleman

Ordinary World (Above And Beyond Remix) - Turn It Around (Sandler Vocal Remix Edit) - Only If I (Hiver And Hammer Edit) - Aurora Feat. Naimee Coleman - 4 Strings - Kate Ryan