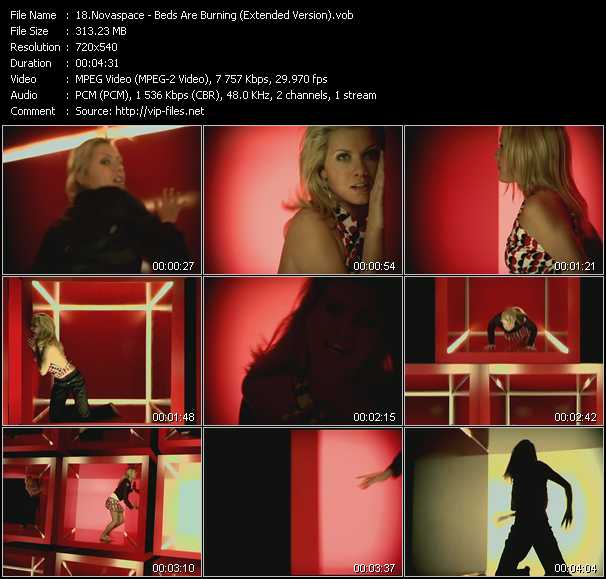 Other Pop-Music Videos of Novaspace

Novaspace video Dancing With Tears In My Eyes

Novaspace video Dancing With Tears In My Eyes

Novaspace was founded in 2002 by the producer Felix Gauder around singer and frontlady Jessica Böhrs. Jessica was born on March 5th, 1980 in Magdeburg (Germany). She started her filming career in 1993, playing in many German TV-films and soaps (Die Wagenfelds, Marienhof). Novaspace first single Time After Time was a handsup cover version of Cyndi Lauper's 1984 hit-single. Released in the first half of 2002, it reached #6 on the German singles chart, #7 in Austria, #15 in Australia, and almost a year later #29 in the UK. Their second single To France (cover of Mike Oldfield's 1984 song) was released not long after the first single and reached #27 in Germany and #23 in Austria. The came their third single Guardian Angel (a cover of Masquerade (5)'s 1983 song) hit the stores in December 2002, which reached #9 in Germany in January 2003 and #11 in Austria. Their first album Supernova was released in January 2003. This collection of cover versions of 80s hit-singles and went #28 in Germany and #39. Then came Paradise, which only managed to reach #48 in Germany and #41 in Austria. Follow-up Novaspace single Run to You (cover version of Bryan Adams' 1984 song) charted moderately : # 38 both in Germany and Austria. The second single Beds Are Burning (cover version of Midnight Oil's 1988 hit) was more successful : #7 in Germany, #2 in Austria, and #42 in Switzerland. Sophomore album Cubes, again filled up with cover versions, reached #27 in Germany and #24 in Austria. So Lonely, the next single, went #15 Germany and #10 in Austria, but did quite poorly in Switzerland (only #87). The fourth single Dancing with Tears in My Eyes was a cover version of an Ultravox's hit single. In 2004, Jessica Böhrs starred in a DreamWorks movie called Eurotrip. 2006 : Novaspace released their third album DJ Edition, a collection of their previous singles in a reworked format, including one new track, a cover of Real Life's Send Me an Angel. The album charted only in Germany (#68). The album also featured a DVD containing the videos of all the singles. One single, All Through the Night, was released and peaked #50 in Germany. Jessica left the project. In December 2006, she joined the German television program Schloss Einstein, plying the role of Nina Waldgruber. 2008 : Jenny Marsala became the new Novaspace frontlady. Legend says that Felix Gauder spotted her on Youtube... 2009 : Novaspace was back with a new single entitled Dancing Into Danger. On the sleeve, a new logo, followed by "new generation"... Then, came a remix entitled Time After Time Rebirth. 2010 : Novaspace's new single was a cover of Climie Fisher entitled Love Changes Everything. Follow-up was Close Your Eyes. 2011 : Don't Look Back was the title of Novaspace's new single.