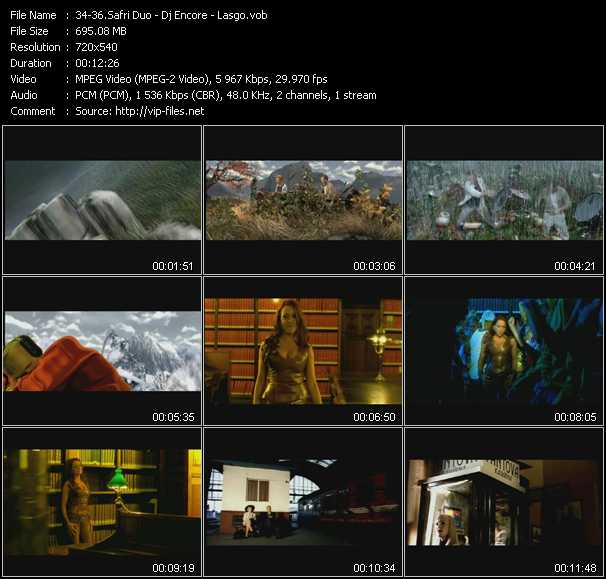 Other Pop-Music Videos of Safri Duo

DJ Encore was born in 1979 in Copenhagen, Denmark. His first single "I See Right Through To You", written for the TV-show Big Brother, was released March 2001 and featured the Danish female vocalist Engelina. In October 2001 their album "Intuition" was released. In 2002 Andreas and Engelina split up, later she joined the girl pop trio, Sha Li Mar. Under the name of Saphire, DJ Encore in 2003 released another track for the TV-show Big Brother, called "There's Someone Watching". This time he had Linnéa Handberg as the female vocalist. In 2005 he released a new single called "You Can Walk On Water" with new Swedish vocalist Johanna Stedt. The song was a cover of the Danish band Catch's hit "Walk On Water".

Uffe Savery (born April 5, 1966) & Morten Friis (born August 21, 1968) met in 1977 at the Tivoli Garden Boys' Guard in Copenhagen, Denmark. They later formed a classic ensamble/percussion duo, while attending the Royal Danish Conservatory of Music, and released 6 albums throughout the 1990s, until they were discovered by producer & DJ Michael Parsberg in 2000. This resulted in the track "Played-A-Live (The Bongo Song)" which became the most popular song in Europe that year. The mix of classical elements fused with trance, tribal and pop resulted in major mainstream success and two more albums the following three years. The 2008 album "Origins" saw the duo returning to their classical roots, inspired by world music and artists such as Mike Oldfield. Safri Duo have worked with prominent names such as Michael McDonald (featured on the track "Sweet Freedom") and Youssou N'Dour (three tracks on the "Origins" album). They performed live with Aqua at the Eurovision Song Contest 2001 in Copenhagen and Jean-Michel Jarre at his AERO concert in Denmark, September 7, 2002.