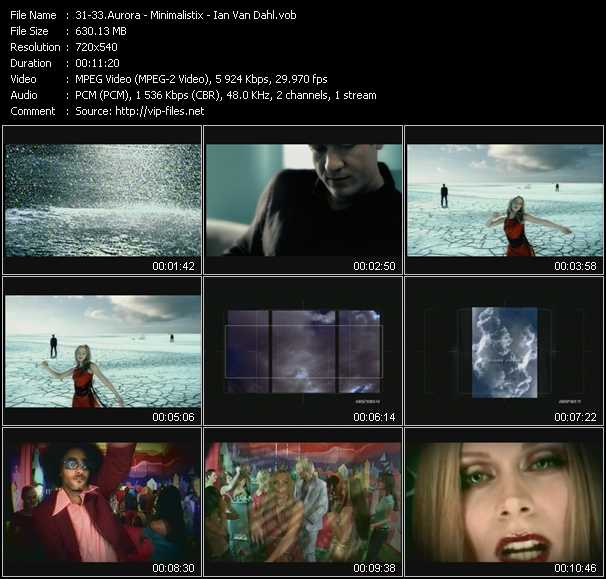 Other Pop-Music Videos of Aurora

Aurora Feat. Naimee Coleman - 4 Strings - Kate Ryan video Ordinary World (Above And Beyond Remix) - Turn It Around (Sandler Vocal Remix Edit) - Only If I (Hiver And Hammer Edit)

Belgian trance/house act created by Christophe Steve Fotini Chantzis and Erik Jos Vanspauwen. In 2001, Ian van Dahl gained attention in Europe with their debut single "Castles in the Sky", featuring vocals by Martine Theeuwen. The follow-up single "Will I?" saw the group fronted by singer Annemie Coenen. They teamed up to give the project a more 'permanent' look. The group's debut album "Ace" was released in 2002. Peter Luts and David Vervoort later joined the team to create "Lost & Found", the group's second album. Christophe and Erik left the record label, A&S Productions, to start their own production company after this release. Shortly after, Annemie Coenen and Peter Luts also left A&S Productions. They started a new project called AnnaGrace.

Trance outfit from Belgium. Minimalistix's first single "Struggle For Pleasure" was released in 2000 and did well within the Belgian club scene. It made it to the top spot in the dance chart and later even reached the top 10 of the regular charts. The follow-ups "Twin Peaks Theme" and "A Forest" never lived up to that success although they became quite popular too. At the beginning of 2002 there a new single was released: "Close Cover". This track, inspired by Wim Mertens as was "Struggle For Pleasure", became an international hit, reaching the 12th spot in the UK singles chart. Later that year the first Minimalistix album called "Elements" was released. Minimalistix also did performances with a live act. Later these were replaced by a dj act called "Minimalistix DJs" done by Dave Lambert. Next to their own singles, Minimalistix became also known for their remixes for 4 Strings (Diving), DJ Sammy (Sunlight), Traveller & In Motion (Believe) and Tillmann Uhrmacher (On The Run).

Two producers hailing from the UK. Aurora made their debut in 1999 with 'Hear You Calling' but only really hit the big time when second single 'Ordinary World' peaked at number 5 in the UK chart. Building on that success, they went on to record their eponymous debut album, straying away from the trance and dance genres they'd used for the singles, and using chilled, downtempo versions of their songs. Aurora have worked with a whole host of different vocalists, such as Naimee Coleman, Lizzy Pattinson, James Khari and Marcella Detroit.