Coldplay - Cobra Starship With The Academy Is, Gym Class Heroes And The Sounds - Peter Bjorn And John video VOB Viva La Vida - Snakes On A Plane (Bring It) - Young Folks 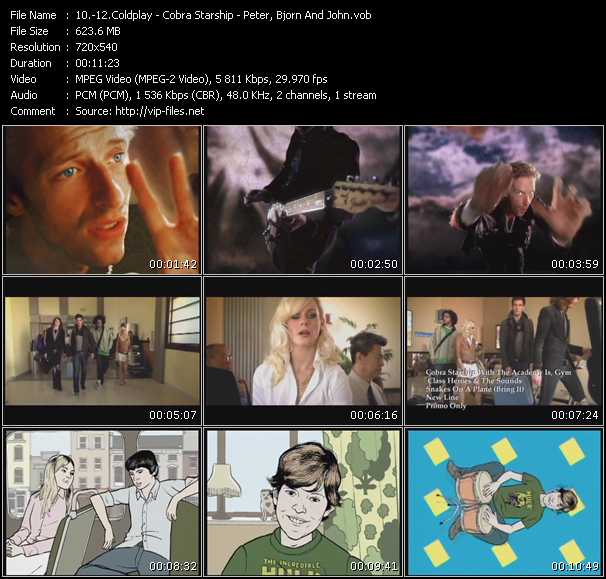 Other Pop-Music Videos of Coldplay

Coldplay - Cobra Starship With The Academy Is, Gym Class Heroes And The Sounds - Peter Bjorn And John

Peter Bjorn and John are an Indie Rock trio from Sweden, formed in Stockholm in 1999 and named with the first names of the band's members: Peter Morén (vocals, guitar and harmonica), Björn Yttling (bass guitar, keyboards and vocals) and John Eriksson. In 2001 they released their first EP, Forbidden Chords (EP) and a pair of singles "Failing and Passing" and "I Don't Know What I Want Us to Do", soon after they signed with the tiny Beat That! label. Initially any fan/press attention they got had to do more with Björn's past production CV, as well as the other members guest appearances on other more well known bands records. This began to change when in 2002 the home recorded self-titled debut album was released and songs like "Matchmaker" and "People They Know" became favourites with the indie-rock crowd. 2004 saw the follow-up with the more complete, mature and darker "Falling Out". The track "It Beats Me Everytime" became a hit on Swedish radio and the album was released Stateside the following year. Two years later was released the album that would definitely launch the band, (worldwide speaking). The new album "Writer's Block" (recorded in Björn's studio in Hornstull, Stockholm) is the first to showcase all three members as songwriters with each taking on lead vocalist duties, and sees the band go into a new musical direction. The first single from the album, "Young Folks", features the vocal talents of Victoria Bergsman from The Concretes and has been hammered even before it's official release. In 2008 the band released their first instrumental album, "Seaside Rock". And the following year they released the album "Living Thing" (and also a deluxe edition CD, where Seaside Rock came as a bonus CD). DJ Mick Boogie remixed the tracks and released them in digital format, calling them "Re-Living Thing". The biggest highlight after "Writer's Block" was the 2011 album "Gimme Some", the hit "Second Chance" became even better known as the opening theme of the American television sitcom 2 Broke Girls which was succeeded by 2016 "Breakin' Point". On October 19, 2018 the band released their eighth album, "Darker Days"! Contact : E-mail: peterbjornandjohn@gmail.com Twitter: @PeterBjornJohn Facebook: fb/peterbjornandjohn Instagram: @peterbjornjohn

Academy Is The Academy Is, TheAcademyIs

The Academy Is... is an American alternative rock band from Barrington, Illinois, formed in 2003. They are currently signed by the Decaydance imprint of the Fueled by Ramen label. They were originally known as "The Academy", but added the "Is..." in 2004 to avoid legal complications with other established bands already under that name. As of 2009[update], the band has released three full albums, Almost Here, Santi, and their newest album, Fast Times at Barrington High.

A 40-person choir and ten-piece orchestra led by Gary Hines, combined traditional African music with urban soul to become one of the most distinctive and popular contemporary gospel groups. Over the course of their career, the group won many awards, from organizations as diverse as the Grammies and the NAACP. Russel Knighton formed the group, The Macalester College Black Chores, that would prove to be the origins of Sounds of Blackness in 1969 at St. Paul, Minnesota's Macalester College. In 1971, Gary Hines was hired as their musical director and the group began developed its own identity. They opened the group up to the entire community and expanded their musical scope to concentrate on all aspects of black music. They designed the group as a way to embrace all manners of African-American music and create rich, diverse music to celebrate God and the human spirit, as well as make social statements. With their new direction in mind, the group renamed themselves Sounds of Blackness. For the first decade and a half of the group's existence, Sounds of Blackness primarily played around Minneapolis, often opening for acts as diverse as The Jackson 5 and Hampton Hawes. They frequently released their own records, which helped them strengthen their local following. Partially by choice, Sounds of Blackness remained a regional attraction until 1989, when Jimmy Jam & Terry Lewis, the hot Minneapolis-based production team, brought Janet Jackson to one of their concerts. Jackson's enthusiastic response inspired Jam & Lewis, who were already in negotiations with Sounds of Blackness, to sign the group to Perspective Records/A&M Records immediately. Before the Perspective deal, any major label interested in the Sounds Of Blackness asked the group to streamline their sound to include only gospel or R&B, or asked them to change their name to "Sounds Of Music"; it wasn't until Perspective that they were allowed to keep their style and sound intact. The group's national debut album, "The Evolution Of Gospel", was largely produced by Jam & Lewis and received strong reviews. The pair produced the group's next two records, 1992's "The Night Before Christmas" (A Musical Fantasy) and 1994's "Africa to America: The Journey of the Drum", as well.