Me And My video VOB Lion Eddie 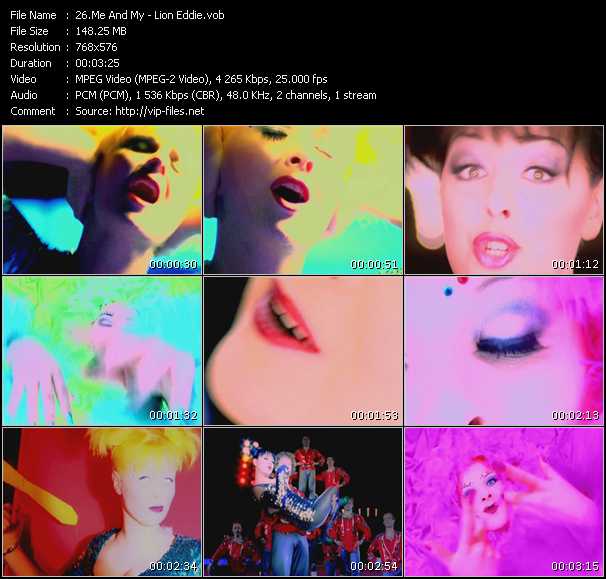 Other Pop-Music Videos of Me And My

Me And My video Dub-I-Dub

Me And My video Dub-I-Dub (Extended Version)

Me And My video Baby Boy

Me And My video Let The Love Go On

Me And My video Dub-I-Dub

Me & My consists of two sisters from Kolding (Denmark), Susan (b. 27 July 1976) & Pernille Georgi (b. 24 July 1974). Before Susanne & Pernille were known as Me & My, they were already a duo called "SuPer Sisters" formed from their first names, Susanne and Pernille. They released two albums of danish songs, "SuPer Sisters" in 1989, and the second "Mariehøenen" in 1990. They also tried running for the eurovision song contest in 1991, but they were too young to participate. Their first international hit was "Dub-i-Dub" in 1995. From their debut album "Me & My", of the same year, also comes the hits "Baby Boy" and "Lion Edie". Their second album "Let The Love Go On" from 1997 and third album "Flying High" from 2001 did not enjoy the same success of the first album. "Flying High" features a dance cover version of D-A-D's "Sleeping My Day Away", which was badly received by many D-A-D-fans in Denmark, who disliked the pop cover version of the rock song. They also collaborated with other Danish artists on a single "Selv En Dråbe" for charity in Denmark. In 2002 Me & My and the danish female-artist Nicole recorded a latino/dance-track "Te Quiero".