Masterboy video VOB Is This The Love 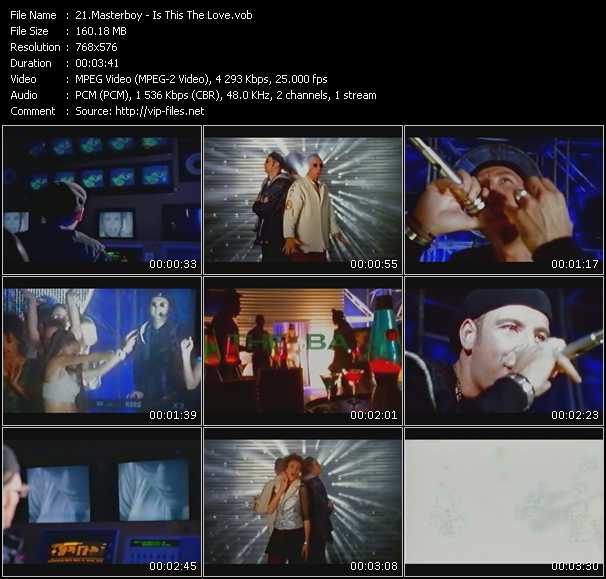 Is This The Love
MPEG-2 video VOB

Other Pop-Music Videos of Masterboy

Masterboy video I Got To Give It Up (Extended Version)

Masterboy video Feel The Heat Of The Night

Masterboy video Everybody Needs Somebody

Masterboy video I Got To Give It Up

Masterboy video Feel The Heat Of The Night

Popular eurodance act. The main figures of Masterboy are Tommy Schleh and Enrico Zabler, which first met in a London club called "The Legends". They started producing music in 1990 and their success grew up with the popularity of eurodance. In 1992, lead vocalist Trixi Delgado became involved in the project. Their biggest hit was scored in 1993 with "Everybody Needs Somebody". Other popular titles included "Feel The Heat Of The Night", "I Got To Give It Up" (both from 1994) and "Generation Of Love". Trixi Delgado left the group in 1996 and was briefly replaced by Linda Rocco (1996-97) and Anabel Kay (Annabell Krischak) (1999-2000). In 2001, Delgado returned briefly with Masterboy, recording a couple of singles which had no significant success outside of Europe. In 2006, a US compilation was released. Only available for download on the internet. It featured all popular hits of Masterboy re-sung by Linda Rocco and Freedom Williams (Ex rapper of C+C Music Factory). The history of Masterboy mixes with eurodance 90s phenomenon. They formed in 1990 and released their first album in 1991 Masterboy Family. In 1993 the Everybody Needs Somebody single achieved worldwide success becoming instant hit an mainstream charts. In 1994, the Different Dreams album consolidated the group as one of the most representative 1994 summer/winter high-energy phenomenon. In 1995 Masterboy granted another success: Generation of Love. By 1996, with the new singer Linda Rocco, the album Colours got moderate success due to eurodance sound diversification. From that time to now the band declined as eurodance. Alongside with Whigfield, Fun Factory, Corona, and DJ Bobo, Masterboy is referred as a symbol of that era: Feel the Heat Of The Night is until today heavily remixed by DJs. Much of the group success was also due to Trixi Delgado charisma. By the end of 2006, Masterboy had announced on official site their comeback in 2007. This announcement was also published on fan site but was later removed. The dream of all Masterboy fans came true on 16. November 2013. Tommy, Trixi and Enrico were performing together after 17 years in Mannheim. As Tommy said in interview after the show -shortly after announcing their comeback, they got more than 60 requests for performances from all around the world. They will focus on singing all their big hits, the compilation of all big hits reworked into nowadays music style is also on plan, but generally they want to present their music as all fans know it. What about new tracks? Tommy says that something new from Masterboy was also created but first of all they want to see if their performances with all 90's hits will be successful and if the fans appreciate their music as their did during the 90's.