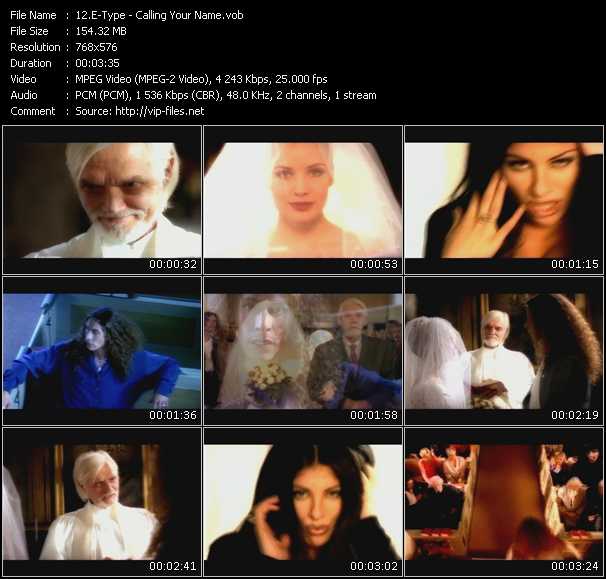 Other Pop-Music Videos of E-Type

E-Type video Back To Life

E-Type video I Just Wanna Be With You

E-Type is a stage name adopted by Bo Martin Erik Eriksson (born August 27, 1965 in Uppsala, Sweden), a Swedish Eurodance musician with rock/metal roots. In his teens he moved to Bromma, and now he lives in the middle of Stockholm. His musical career started early. After having been a drummer (in the speed metal bands Maninnya Blade and Hexenhaus) for many years he met up with Stakka Bo in 1991, with three singles as a result. This lead to a work as VJ at one of the most popular TV-station in Sweden - Z-TV! The summer of 93, his first solo single, called "I'm Falling", was released without reaching any great success. E-Type's breakthrough came in 1994 with the collaboration with the producers from Cheiron (Denniz Pop, Max Martin, and Amadin) on his debut album Made in Sweden. A single from this album, "Set the World on Fire", reached gold status in Sweden, #1 on the Swedish dance chart, #2 on the Swedish sale chart, and #4 in Israel. Eventually four other singles were released from the album: the ballad "Do You Always (Have to Be Alone)", "This Is the Way" and "Russian Lullaby" (co-written by Jonas "Joker" Berggren from Ace Of Base). "This Is the Way" reached #15 on the Billboard Club Chart in the United States and #6 on the UK Club Chart. Most of the tracks feature the female vocalist Nana Hedin, who is featured on nearly all of E-Type's albums. The album itself was released on October 31, 1994 and made it up to #2 on the album-chart. Over 100,000 copies were sold in Sweden and the album was listed for 26 weeks. During 1996, E-Type and the producer-team spent their time working on a second album The Explorer, which was released in Sweden on October 23. The album sold more than 20,000 copies. His third album, Last Man Standing, was released on the November 27, 1998 and went to #1 in Finland and Sweden, going double platinum and platinum respectively. The album remains E-Type's best-selling album with sales of 3 million copies worldwide and includes hit singles like "Angels Crying" and "Here I Go Again". E-Type recorded the official song, "Campione 2000" for Euro 2000. "Campione 2000" is played every time the English football team Bolton Wanderers take to the field. In 2001, he released his new single "Life" on November 12. The forthcoming album release, entitled Euro IV Ever, was postponed until the end of 2001 and finally released on November 21. An album release party was held on the November 25. Max Martin, Rami and E-Type produced the album Loud Pipes Save Lives in 2004, and released it on March 25. It's so far the last E-Type album to feature Nana Hedin on vocals. At the beginning of April, "Paradise" reached #11 in Finland and entered the Finnish Dance chart at position #28. On May 14, 2007, E-Type released a new single called "True Believer". There was also a new album in 2007, Eurotopia, released on October 31. It's an album that mainly features E-Type's new female vocalist, Sanne Karlsson. Much of E-Type's success in the 1990s was built on dancer Dee (29) (Dilnarin "Dee" Demirbag), who lip-synched to Hedin's vocals in several of E-Type's music videos such as "This is the Way", "Angels Crying", "Here I Go Again" and "Life", and appearances on TV shows and concerts. "Dee" left the band in 2001 to pursue a solo career. However, she got back together with E-Type in December 2006 for a concert in Russia, and is still touring with the band occasionally. She also appeared in the 2007 music video for "True Believer".