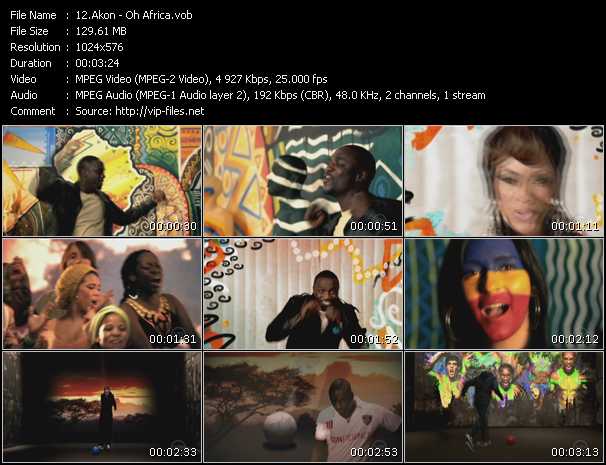 Other Pop-Music Videos of Akon

Beatnuts Feat. Akon - X-Ecutioners Feat. Ghostface Killah, Trife And Black Thought - Young Rome Feat. Guerilla Black video Find Us (In The Back Of The Club) - Live From The PJ's - Freaky

Akon video Sorry Blame It On Me

Nelly Feat. Akon And Ashanti video Body On Me

Colby O'Donis Feat. Akon video What You Got (Extended Version)

Selena Gomez And The Scene - Kat DeLuna Feat. Akon - School Gyrls video Round And Round - Push Push (Extended Edit) - Something Like A Party

Colby O'Donis Feat. Akon video What You Got

Shontelle Feat. Akon video Stuck With Each Other

Shontelle Feat. Akon video Stuck With Each Other

Mims - B.O.B. - Akon Feat. Colby O'Donis And Kardinal Offishall video Move (If You Wanna) - I'll Be In The Sky - Beautiful

50 Cent And Akon video Still Will

Akon video Sorry, Blame It On Me

Born: 16 April 1977 in St. Louis, Missouri, USA. American R&B singer-songwriter and record producer. Akon was born to Senegalese parents and raised in a musical setting. He was taught to play several instruments including the djembe. He was born in St. Louis, Missouri, USA, so that he would not have to go through the immigration process, but he lived in Dakar, Senegal until the age of 7, split time between the US and Senegal until he was 15, then he moved permanently to Jersey City, New Jersey, USA. He rose to prominence in 2004 following the release of "Locked Up”, the first single from his debut album "Trouble". His second album, "Konvicted", earned him a Grammy Award nomination of the single "Smack That". He has since found two record labels, Konvict Muzik and Kon Live Distribution. He is known as one of the most successful and versatile R&B singers of the 21st century, grossing over US$30 million a year according to Forbes. Akon often sings hooks for other artists and is currently accredited with over 300 guest appearances and 40 Billboard Hot 100 songs. He is the first solo artist to hold both the number one and two spots simultaneously on the Billboard Hot 100 charts twice. He has had 6 Grammy Awards nominations and has produced many hits for artists such as Lady Gaga, Colby O'Donis and Leona Lewis. Son of Senegalese jazz drummer and percussionist Mor Thiam.