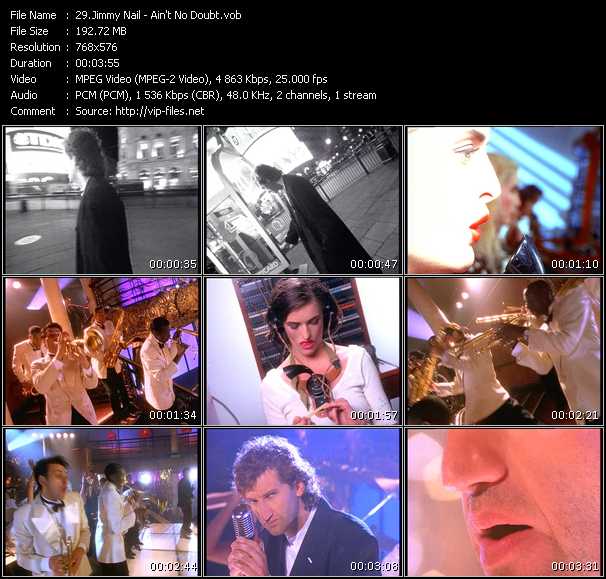 Other Pop-Music Videos of Jimmy Nail

Jimmy Nail is a British actor and singer (born March 16, 1954, in Newcastle-upon-Tyne), famous for his rugged looks, hit singles and a strong Newcastle accent, although sometimes it is weaker, depending on what role he is playing and who he is talking to. His birth name was James Bradford, which he changed to "Nail" after he stepped on a 15 centimeter spike in a glass factory. In the late 1970s he sung in a Newcastle pub band called the King Crabs, more often than not wearing a woman's dress. He rose to fame playing Leonard Jeffrey 'Oz' Osborne in Auf Wiedersehen, Pet in 1983. Jimmy Nail has also starred in a number of films and had a long musical career, having been a singer before he was picked out at an audition to play Oz. Nail spent six months in prison on a "grievous bodily harm" sentence following a drunken football match fight in his twenties After the first two series of Auf Wiedersehen, Pet, Nail found himself typecast and had no more major breaks until the detective series, Spender, which he co-wrote. This was followed by Crocodile Shoes, which also featured Nail as a musician. On the strength of his musical performances in the series he released a number of albums. Mark Knopfler plays guitar on some tracks, a compliment that was repaid with an important plot reference to Oz's being a fan of Dire Straits in the third (revived) series of Auf Wiedersehen, Pet.