Twista Feat. Do Or Die And Johnny P. video VOB Yo Body 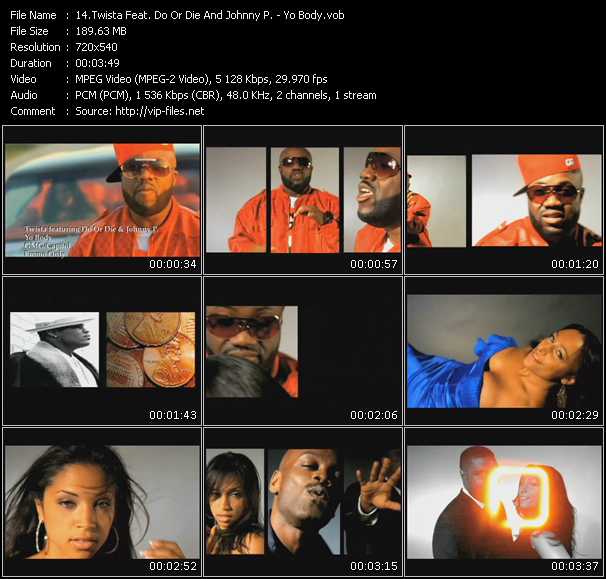 Other Pop-Music Videos of Twista

Twista Feat. Do Or Die And Johnny P.

Carl Terrell Mitchell (born November 27, 1973), better known by his stage name Twista (formerly Tung Twista), is an American rapper. He is best known for his chopper style of rapping and for once holding the title of fastest rapper in the world according to Guinness World Records in 1992, being able to pronounce 598 syllables in 55 seconds In 1997, after appearing on Do or Die's hit single "Po Pimp", produced by The Legendary Traxster, Twista signed with Big Beat and Atlantic Records, where he released his third album Adrenaline Rush and formed the group Speedknot Mobstaz, in 1998. His 2004 album Kamikaze reached the top of the US Billboard 200 album chart, after the success of the Billboard Hot 100 #1 single "Slow Jamz".

R&B-singer from Chicago, Il, formerly signed to Rap-A-Lot Records and best known for his work with Do Or Die and Scarface (3). Passed away November 2016, aged 44.

Rap group from Chicago, IL, made up of brothers AK47 (Dennis Round) & N.A.R.D. (Anthony Round) along with long time friend Belo Zero (Darnell Smith).