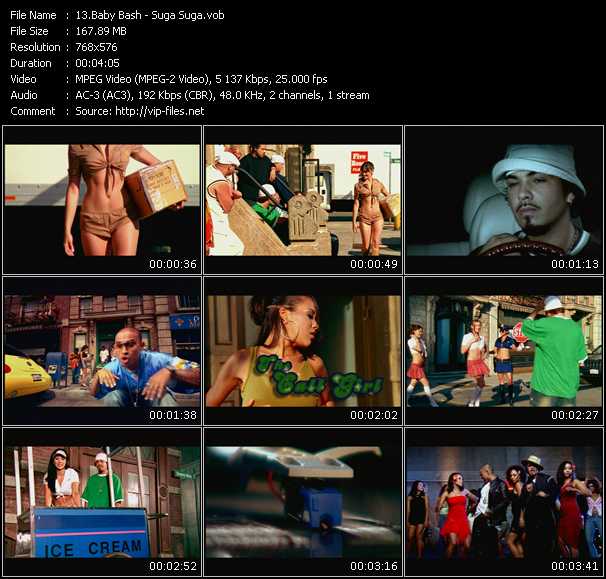 Other Pop-Music Videos of Baby Bash

Doll Phace Feat. Baby Bash video Get Used To This

Baby Bash Feat. Sean Kingston video What Is It

Baby Bash Feat. Sean Kingston video What Is It

Baby Bash or Baby Beesh (real name: Ronnie Ray Bryant) (born on October 18, 1975 in Vallejo, California, USA) is a Mexican-American rapper. Baby Bash grew up with his Latin side of the family. His Mexican mother and Anglo-American father both went to prison when Bash was young, resulting in little contact with them. Growing up, his uncles and grandmother exposed him to many different types of musical genres. He also worked with the late Mac Dre. Baby Bash's career began to rise when he went to Houston, Texas, where he met fellow rapper South Park Mexican. Thus, he decided to re-locate there. Prior to his success as a solo artist he was part of rap groups Potna Deuce, Latino Velvet and N2DEEP. Bash's debut album entitled Savage Dreams was released on the independent label Dope House Records in 2001. The acclaim he received soon caught the attention of Universal Records, who signed him later that year. In 2003, Baby Bash released his first album on a major label, Tha Smokin' Nephew, and Super Saucy in 2005. He recently was featured in Paula DeAnda's first single "Doin' Too Much" from her debut album Paula DeAnda. On June 26th, 2007, actor Shia LaBeouf started a beef with Baby Bash on San Diego radio station KHTS-FM Channel 933.