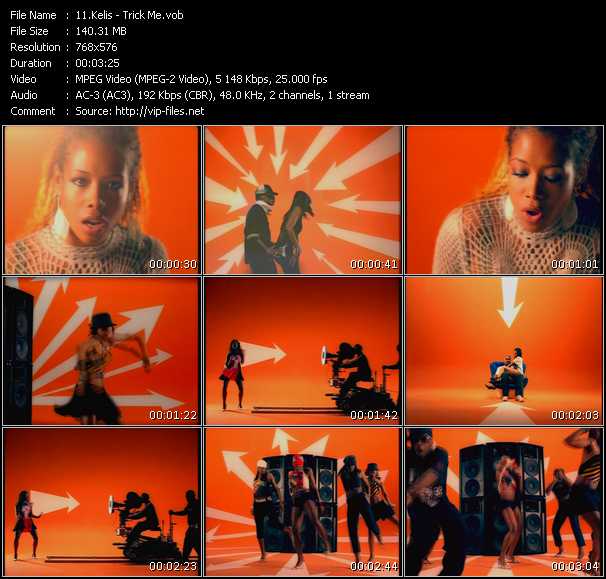 Other Pop-Music Videos of Kelis

Kelis video Get Along With You

Kelis video Get Along With You (ETV Bonus Mix)

Kelis video Caught Out There

Kelis video Caught Out There

Kelis video Get Along With You (ETV Bonus Mix)

American singer and songwriter, born 21 August 1979 in Harlem, New York City, USA. Kelis graduated from Fiorello H. LaGuardia High School in 1997, being a violin player for 14 years, and signed a production deal with the then-under-the-radar production team The Neptunes. They produced her debut album "Kaleidoscope", released on Virgin. Her sophomore release, "Wanderland", wasn't as fortunate and did not get released in the US, which led to tensions with Virgin; Kelis was later dropped because of lackluster performance. She found solace in a romance with rapper Nasir Jones whom she married to in 2005 and divorced from in 2010. Her career started going full throttle with the buzz surrounding her third album, "Tasty", which features hit single "Milkshake" that was nominated for a Grammy for Best Urban/Alternative Performance in 2004 and peaked at #1 on Billboard's Hot Dance/Club Play Songs chart in December 2003 with remixes by X-Press 2 and DJ Zinc. "Kelis Was Here" was certified Silver in the UK for sales of over 60,000 copies. Things went quiet for a while, until Kelis returned to the scene with her first electronic album titled "Flesh Tone", which features production by the likes of David Guetta, Benny Benassi and Boys Noize, amongst others. In April 2014, Kelis released her sixth studio album "Food". Fully produced by David Andrew Sitek, the album sees Kelis heading in a new musical direction with the album containing soul, funk and gospel elements.