Androids video VOB Do It With Madonna 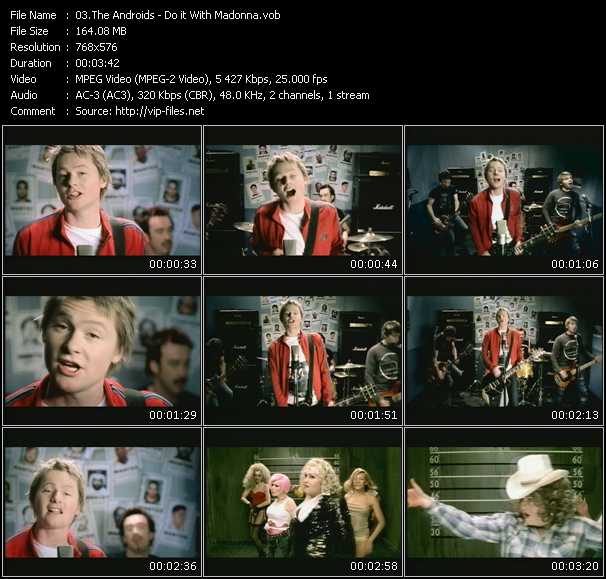 Do It With Madonna
MPEG-2 video VOB

Other Pop-Music Videos of Androids

Androids video Do It With Madonna

Androids video Do It With Madonna

One-album electronic space-disco studio project Led by producer - songwriter Adrian Wagner (2) "Robert Calvert and I talked about the hilarious relationship between disco dancing at that time and the creation of, so called, 'leisure androids'. As with most things invented by humans they are more likely to go wrong and in fairly extreme ways! What happens if a male android falls in love with a female (girl!) android? What happens if they are a different design and "they can't make no connection"? What about if the female android he fell in love with danced too fast and had a strange sight which gave her a different 'view' of the world around her? What about reflecting Robert's own paranoid personality through this love stricken Android? - we fell about laughing and the 'Connection Disconnection' track was born! I wove Robert's 'Paranoid Android' idea into the spoof concept space fantasy album called 'Disco Dream and the Androids’. The Album was released in Europe and we all took assumed names on the credits using anagrams. The Paranoid Android is called Rengaw and the female android is called Nadria! Also on the Album, were Lou Reed's wonderful backing singer androids "The Thunder Thighs" (Dorémi - Fasola and Latido! better known as Karen Friedman, Dari Lalou , and Casey Synge who also appeared on my Charisma’s ‘Instincts’ album) and many other well known musicians who played under assumed (android) names." Adrian Wagner - November 2009

Do It With Madonna - Androids

Do It With Madonna - Androids