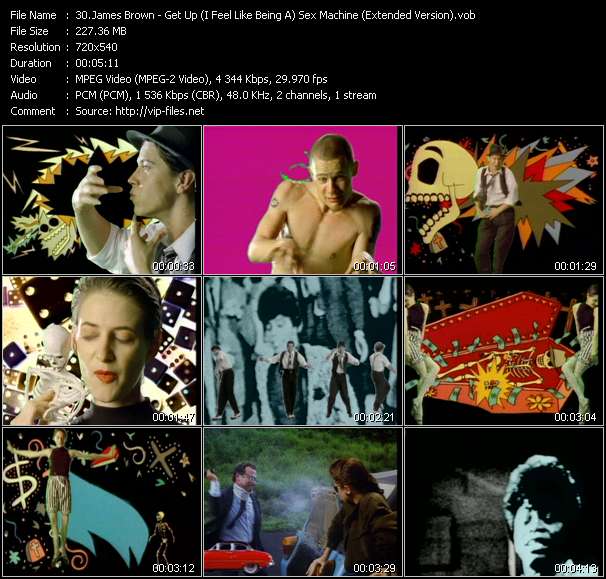 Other Pop-Music Videos of James Brown

James Brown video I Got You (I Feel Good) (From "Good Morning, Vietnam")

James Brown video The Payback (Part 1) (From The Midnight Special)

DVD: Burt Sugarman's The Midnight Special. Live On Stage In 1974

James Brown video I Got You (I Feel Good)

American singer, songwriter, and musician. Born: 3 May 1933 near Barnwell, South Carolina, USA. Died: 25 December 2006 in Atlanta, Georgia, USA (aged 73). James Brown was raised in poverty in Augusta, Georgia. 1950s: Joined the Gospel Starlighters in 1953, a vocal quartet led by Bobby Byrd, after completing a four-year stint in prison for robbery. As Brown became the focal point of the act, the group changed its name to 'The Famous Flames' and its focus from gospel to R&B. In 1955 The Famous Flames record "Please Please Please" at the studio of WIBB in Macon, Georgia. In 1958 James Brown's first #1 hit, "Try Me", is released. It was the best-selling R&B single of 1958, and the first of 17 chart-topping R&B singles by Brown over the next two decades. 1965: Records "Papa's Got a Brand New Bag", a revolutionary single that ushers in a whole new era of soul music. Released that summer, it tops the R&B chart for eight weeks and even cracks the pop Top Ten. 1971: Signs with Polydor Records, for which he recorded extensively throughout the decade. 1974: The Payback, the most successful of James Brown's Seventies albums—many of which were double-LPs with lengthy, extended tracks—makes its debut on Billboard's album chart. It is the only gold-certified (500,000 copies sold) album of his career. 1984: Bronx DJ Afrika Bambaataa teams up with Brown to record the anthemic single "Unity". 1986: "Living In America", the theme song from Rocky IV, reaches #4 on Billboard's Hot 100 chart, becoming Brown's biggest pop hit since "I Got You (I Feel Good)" went to #3 in 1965. 1992: Receives a Lifetime Achievement Award at the 34th annual Grammy Awards. 2006: Hospitalized with pneumonia, dying on Christmas Day. Inducted into Rock And Roll Hall of Fame in 1986 (Performer). Inducted into Songwriters Hall of Fame in 2000.

Get Up (I Feel Like Being A) Sex Machine - James Brown

Get Up (I Feel Like Being A) Sex Machine - James Brown