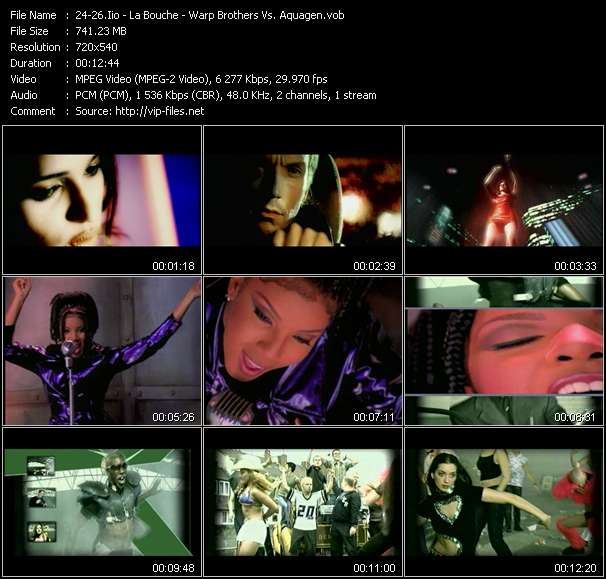 Other Pop-Music Videos of Iio

New York dance act, generally producing vocal house. Having shot to fame in 2001 with the massive hit "Rapture", iiO - producer Markus Moser and former vocalist Nadia Ali - have since released further singles and an album entitled "Poetica". The duo came to work together when Moser was on the lookout for someone to front his productions. A friend had heard Ali sing while she was working for Versace NYC and she was promptly signed up. After singing on "Rapture", "At The End", "Smooth", "Runaway" and "Kiss You", Ali quit iiO in 2005 to concentrate on her solo career.

La Bouche (IPA : [la buʃ]) was a Eurodance act based in Germany, fronted by black American-German singer Melanie Thornton. Their most successful hit "Be My Lover" was top 10 across Europe and peaked at #6 on the Billboard Hot 100 in 1996. The group was the brainchild of German producer Frank Farian. In 2000, after Melanie Thornton left the group to pursue a solo career, she was replaced by Natascha Wright with a single called "All I Want". This track didn't chart well, though, and the group disbanded. Meanwhile, Melanie Thornton was achieving large sales with "Wonderful Dream" and was chosen by Coca Cola to perform the theme song for a Christmas Commercial. While promoting this,Melanie Thornton was killed in a plane crash near Zurich, Switzerland, November 24th 2001. In April 2002, Farian compiled songs from Thornton's album along with selections from the first and second La Bouche albums into a best of collection entitled The Best of La Bouche (feat. Melanie Thornton). In November 2002, one year following Thornton's death, Farian prepared a tribute single entitled "In Your Life", a song which had been previously unreleased. Farian combined her vocals with Kayo Shekoni from Le Click, who provided additional vocals to complete the mix. The single was released worldwide in 2002 and in the U.S. in 2003. It peaked at number 9 on the Hot Dance Club Play chart. In 2007 a 3-track EP was released on iTunes under the name 'Le Click' titled "Let's Click: 90's Dance Classics." These are 3 tracks from the S.O.S & A Moment Of Love album recording sessions that didn't make the cut.

DJ and producer duo started in in 1999. Their style is uplifting hard house, something between The Prodigy, Chemical Brothers, hard acid, techno and hard trance. Their biggest hits have been 'Phatt Bass' and 'We Will Survive' which went top 10 in several countries including the UK and Germany.