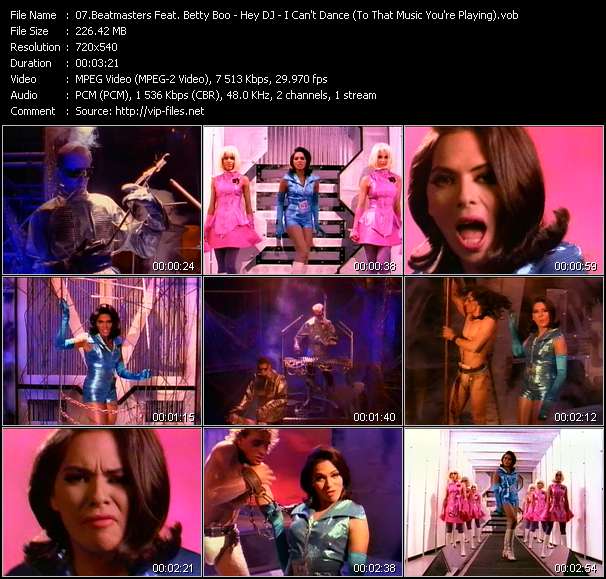 Other Pop-Music Videos of Beatmasters

Beatmasters With P.P. Arnold video Burn It Up

Beatmasters video Dunno What It Is

Beatmasters With Merlin video Who's In The House

Members: Richard Walmsley, Amanda Glanfield, Paul Carter British producer trio who enjoyed considerable success in the late 80's/early 90's. As well as producing Yazz' smash hit "Stand Up For Your Love Rights" in 1988, they also landed several Top 20 hits under the Beatmasters moniker with a series of guest vocalists: The Cookie Crew ("Rok Da House"), Betty Boo ("Hey DJ / I Can't Dance (To That Music You're Playing)"), Merlin MC ("Who's in the House") and P.P. Arnold ("Burn It Up"). These hits were all featured on their debut album "Anywayawanna". After their second album "Life & Soul", The Beatmasters ditched their own recording career in favour of production work and remixes for artists such as The Shamen, Moby, Erasure, Pet Shop Boys and Marc Almond.

At school, Alison Clarkson trained to be a sound engineer. Prior to her number 7 UK hit "Hey DJ I Can't Dance (To That Music You're Playing)" with Beatmasters, she was a vocalist for She Rockers and Hit 'N' Run. Her (mostly self-produced) debut solo album, "Boomania", spawned two further top ten hits. Boo won the 1991 Brit Award for Best Pop Artist and signed to WEA International Inc.. But this second, major label, album was not a sales success, and a world tour was cancelled when it was revealed she was lip-synching her live vocals. Alison Clarkson returned to the industry in 1997 as a songwriter. She co-wrote "Pure and Simple" for Hear'Say - the fastest selling single in the history of the UK charts, and has also written for Girls Aloud.