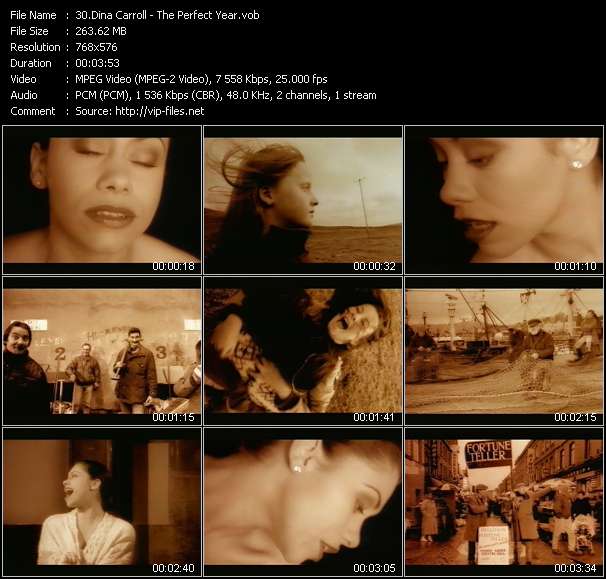 Other Pop-Music Videos of Dina Carroll

English singer of Scottish and African American descent who at 16 was signed to London dance music label Streetwave. On moving to West London in the mid-1980s she recorded two singles, "One Nation / Set It Off" and "(Solution To) The Problem" (uncredited, all credited to a nonexistent group called Masquerade). In 1989, she secured a recording contract with Jive/Zomba Records and released a number of singles in 1989 and 1990. She also provided vocals to Brothers In Rhythm's track "Peace And Harmony", from their release " Such A Good Feeling". After a short time at Jive/Zomba, Carroll was spotted by Dennis Ingoldsby, one half of First Avenue Management, a small and newly founded management group. First Avenue were also managing another unknown band called Quartz, and she provided vocals for their single "It's Too Late", a Carole King cover. Follow-up single, "Naked Love (Just Say You Want Me)" was also released, charting at number 39. After two singles with Quartz, First Avenue decided to relaunch Carroll as a solo artist, and her first solo single, "Ain't No Man" was released in June 1992. In order to capitalise on the momentum of "Ain't No Man", Carroll and producer Nigel Lowis worked on future singles and her debut album "So Close". Carroll was approached by Robert Clivillés and David Cole of C + C Music Factory who invited her to New York to become the first British artist to work with them. Carroll interrupted the writing and recording of her album to record "Special Kind Of Love". Her first ballad single "So Close" in December 1992, which was another top 20 hit, and when her album of the same name, "So Close", was released In January 1993, it entered the top 10 of the UK Albums Chart. Carroll was named Best Female Artist at the BRIT Awards in February 1994. She then took a break from her recording and touring obligations. A new album, "Only Human" followed in October 1994, debuted at number 2 on the UK Album Chart, equalling the position of her debut "So Close". After being nominated for 'Best British Female Artist' in the 1997 BRIT Awards, she then went into artistic hibernation, and although there were press reviews of tracks like "Living For The Weekend" (reviewed in Billboard Magazine as a promo US single), the decision was made to concentrate on the making of the 3rd album rather than release more singles from the 2nd, as Mercury were happy with the sales figures off the back of just two singles. She returned to the drawing board in 1999 for her third self-titled album "Dina Carroll", which was never released. For this, she went to Los Angeles to work with producer Rhett Lawrence, most famous for his production of Mariah Carey's debut album. The collaboration was originally intended only for three tracks, but they ended up recording a full album in Rhett's home studio. In 2000, due to First Avenue Management entering into a crisis phase when most of their artists were dropped by their labels, Dina Carroll was also caught up in this, therefore this third album remained unreleased, and she left First Avenue at the end of 2000. 2001 briefly saw a revitalised Dina, with a new single and a greatest hits compilation released in the spring and the summer respectively. Carroll's cover version of Van Morrison's "Someone Like You", featured in the "Bridget Jones's Diary" soundtrack reached number 38. This wasn't helped due to the fact that Van Morrison's version is actually heard in the movie and Dina's cover tracklisted on the OST CD, which had already been available for 2 months and topped the compilation album charts. To fulfill her contractual obligations to Mercury, she released "The Very Best Of Dina Carroll" in June 2001. It entered the UK charts at number 15, despite Dina only having released two studio albums to date. Born August 21, 1968 in Newmarket, Suffolk, UK.