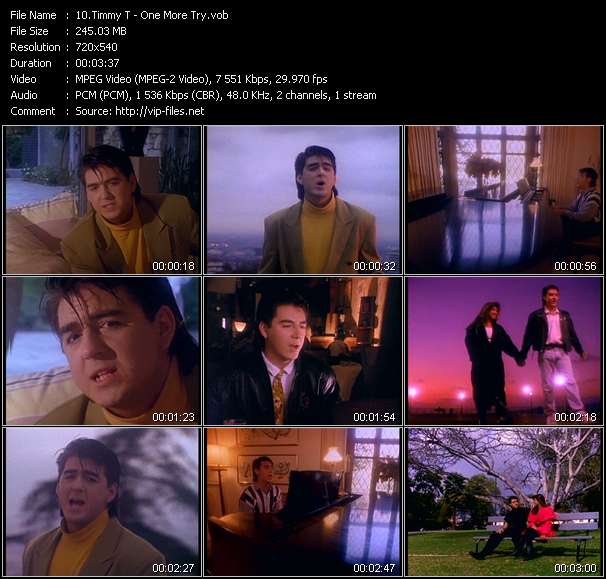 Other Pop-Music Videos of Timmy T

Timmy T video Over And Over

American pop singer and producer, born on September 21, 1967 in Fresno, California. He is best known for his 1991 Billboard Hot 100 #1 single "One More Try." Timmy T started out in the 1980s in small rap groups in Fresno, but felt that he would rather do dance music. He purchased a Moog synthesizer and a Roland TR-808 drum machine at a pawn shop, and recorded his first single, "Time After Time," in his garage. He delivered copies to a Fresno radio station and asked them to play his single. After the DJ played the song, there were many calls requesting who was performing that song. The DJ recommended that Timmy T take his record to radio stations in Los Angeles for more exposure. After Los Angeles pop station Power 106 played the record, it received airplay from several more stations throughout the country including Hot 97 in New York. Timmy got a record deal with Quality Records, and "Time After Time" went on to peak at #40 on the Billboard Hot 100 singles chart. He released another single at the end of 1990, "One More Try," which proved to be much more successful than his first single, selling over a million copies and climbing its way to the top of the Billboard charts the next year. He recorded his first album Time After Time, featuring the title track (his first single), "What Will I Do," "One More Try," and "Over and Over." None of the singles from his second album, All For Love, reached the charts however his song "Over You" was featured in the motion picture "The Raffle" in the company of Elton John.